Pickleball:  The Serious Sport with the Funny Name. 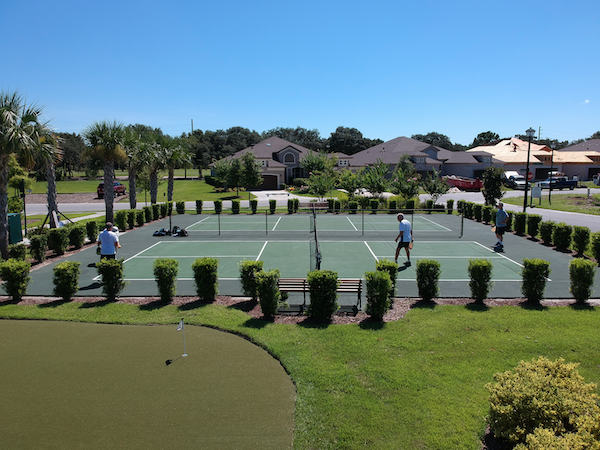 Pickleball is one of the fastest-growing sports in the world, and for good reason.  Florida’s gentle year-round climate is the perfect breeding ground for Pickleball enthusiasts. Even though Pickleball has been around for decades, its popularity is soaring at golf and country club communities throughout the Florida’s First Coast.

Pickleball is a paddle sport that combines elements of tennis, badminton, and ping-pong using a paddle and plastic ball with holes, like a whiffle ball.  It’s appropriate for all ages and skill levels, which a big part of its charm.  It can also be challenging and fast-paced and highly competitive among more experienced players.

What is the history of pickleball?

Pickleball was invented in 1965 on Bainbridge Island,  just a short ferry ride from Seattle, Washington.  Three dads–Joel Pritchard, Bill Bell, and Barney McCallum–came up with the idea as a way to entertain their children, who were becoming bored with their usual summertime activities.

Accounts of how the game’s name originated differ.  According to Joel Pritchard’s wife Joan, she started calling the game pickleball because the combination of different sports reminded her of the pickle boat in crew, where oarsmen were chosen from the leftovers of other boats.  But according to Barney McCallum, the game was officially named after the Pritchard’s’ dog Pickles, who would chase the ball and run off with it. 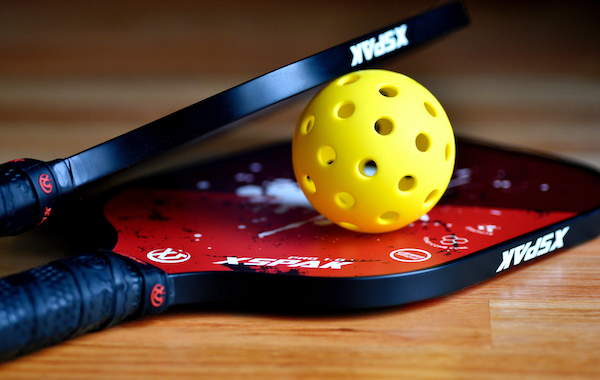 Today, more than 4.8 million people play pickleball in the U.S., according to the 2022 Sports & Fitness Industry Association (SFIA) Single Report on Pickleball–almost double the number who played five years ago.  The game now has two national professional tournaments that were launched in the last four years, and pickleball organizers are courting corporate sponsors to help grow the sport in the U.S. and abroad as part of a bid for inclusion in the Olympic Games.  To mount a successful Olympic bid, a sport needs competitive players in at least 75 countries.  So far, the International Federation of Pickleball has at least 70 member nations. Most of them have joined in the last three years.

The game is quite popular in active adult communities and is one of the many resort-style amenities found in the Jacksonville area, throughout Duvall County, and in the Ormond Beach area.

Pickleball combines elements of tennis, badminton, and ping-pong, and can be played as fast or slow as the players’ skill levels allow. It can be played indoors or out, and is often played on retrofitted tennis courts that have been repainted to reflect a court size that is approximately one-quarter the size of a regulation tennis court, and many communities can actually get four pickleball courts from a single tennis court.  The same court is used for both doubles and singles play.

There a plenty of places to play, and more becoming available every day.

The USA Pickleball Association has an official program called Places 2 Play, that has a database of more the 1,900 sports ambassadors and 40,000 members who continually update the Official USA Pickleball Places 2 Play database.  As of 2019, they were tracking nearly 8,000  known pickleball locations and have added an average of 110 new locations each month ever since.

You can find pickleball courts in some of the area’s most popular active adult communities, like the Del Webb communities of Nocatee, Del Webb eTown, and Del Webb Wildlight.  Likewise, Halifax Plantation Golf Club, one of the area’s oldest golf and country club communities, has a growing league of pickleball players.  Players can either play a full game to 11 points, or they can play ten-minute rounds.  If playing ten-minute rounds, they often switch courts and switch partners in round-robin fashion.  Older players, many of whom are former tennis players, report that pickleball is much easier on their joints than tennis.  Plus, pickleball is a social activity because it allows players to be close enough to one another that they can hold conversations, making it a good bonding experience with friends and family. 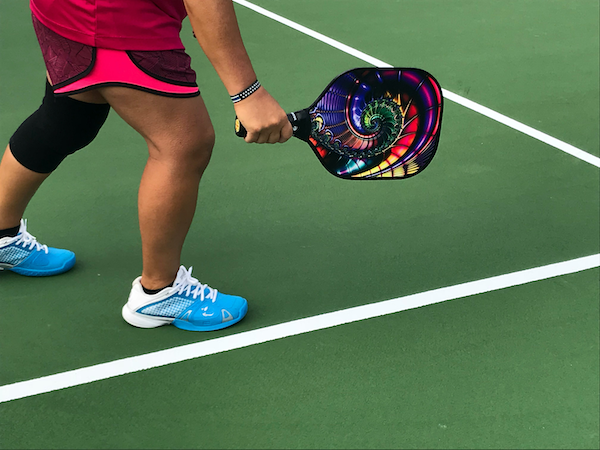 What should you wear when playing pickleball?

Players wear just about anything comfortable and appropriate for the climate: athletic shorts, sweatpants, wicking apparel, t-shirts, etc. Tennis-style dresses and skirts for females are common. Comfortable court shoes are a must; sneakers or running shoes do not supply the right kind of support for the side-to-side action inherent in pickleball. Eye protection is highly recommended. As for accessories, players may wear hats, visors, sweatbands and light jackets or sweatshirts during Florida’s chillier months.

There are lots of local Pickleball resources.

On the Ormand Beach Pickleball Facebook page, you can find locations, hours of play, upcoming events, and information on fees to play.  Just visit https://www.facebook.com/Ormondbeachpickleball/.  Jax Pickleball is North Florida’s only pickleball store and carries equipment, apparel and accessories.  Nearby Neptune Beach has its own group called Pickleball by the Sea, who meet regularly at Jarboe Park for fun and exercise.

Want to play the serious sport with the funny name?

USA Pickleball offers a free Master the Basics video series, tips and strategy videos, and even five free bonus videos and a free e-book on their website at https://usapickleball.org/what-is-pickleball/how-to-play/. It’s great exercise for your mind and body and allows you to work on your balance, agility, reflexes, and hand-eye coordination without putting excessive strains on your body.  So, grab a racket and play a round.  Chances are very good you’ll be hooked like so many others as well. Your perfectly optimized content goes here!

Please enter your username or email address. You will receive a link to create a new password via email.